Going through the Times of India I came across a post titled “25 things that make us truly Indian!“,though it is funny post and not so serious point mentioned in the post but one point caught my eyes and I decided to depict it in my Cartoon.

The point is “We great citizens will piss in public but not kiss in public.That’s against our Indian ethics.Future generations will be born spastic if we indulge in PDA.” This point made me laugh and at the same time I realize the trueness of the point.

India is developing,we are slowly but surely following western lifestyle but do you really think that we Indians have really developed our mindset.There are so many instances to point out to prove that we Indians are not enough Broad Minded to accept PDA like things but at the same time will happily adopt Western Lifestyle….

What I want to prove here is that PDA to a certain extent is ok and I believe India being a conservative country,Indians will never cross that limit.We don’t care about Pissing in Public but we get Shock when we see someone in PDA….What does that mean?

Check out my Cartoon and Have your Say…. 🙂 because I want to know what others think in this matter.. 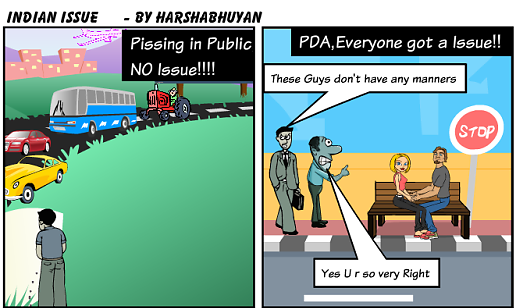 50 thoughts on “Indians Issue-Piss and PDA”

Your Comment feed this Blog..So Feed it Please Cancel reply