As we all know One Horned Rhino is found only in Assam,India.It is kind of Pride not only to Assam but to whole of India,but as you all know the kind of sorry state they are going through…on the verge of extinction because of only few who just in the name of few bucks don’t care to kill them.

Just 10-12 days has passed in 2015 and 3 rhinos has been killed,what a shameful act.And we as citizen of Assam and India just don’t care enough..

Don’t talk about our leaders,The Assam Government just don’t care and never will…Even the Central Govt. have put a blind eye towards it.

If by any chance our Prime Minister happens to go through this,I would just like to request him to take necessary and stern steps to Save Our Pride-The One Horned Rhino.

I guess everyone is aware of the fact that Mrs.Sonia Gandhi is out of India for her health check up in The US.This happened few days ago when she was rushed to AIIMS last Monday after she complained of chest pain and exhaustion in the Lok Sabha during the discussion on Food Security Bill when it was in the last stages of adoption.I guess Politicians in India are pretty good actors too.. 😛

Now here is the typical scene I interpreted as Sonia Gandhi from The US talking to Mr. Manmohan Singh in Delhi..Check it out and have fun.. 🙂

And I guess the main reason Politicians look for scams as they have to pay for their Medical Check-Up.. 😛

With all said and done..I wish Sonia Ji to get well soon and fly back to India and stop fooling Indians.. 🙂

On 15th August 2013 India celebrated its 67th Independence Day and as usual it  was the PM of India who delivered the speech at the Red Fort…I listened to his speech for about 10 minutes and after that I felt like there is no good listening to his speech as his speech is all made of some fake promises,some fake verses and all…

A common man would feel like breaking his TV sets listening to his speech,though his speech was full of hope but his speech lacked the positivity that one would expect from a PM…So to show my frustration on his speech I made a cartoon which I proudly dedicate to our incompetent PM and Government…

You can check the highlights of his speech here-Indian Express,if you are really interested to know what he said..Addressing the Nation from a Bullet Proof Box is very easy for our leaders but I wonder if they can say such nice things in their speech why can’t they do the same in reality… 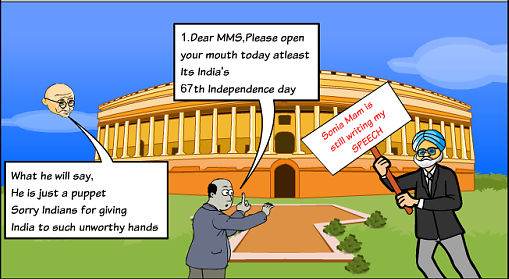 Dear Indians–It is of no use looking at our leaders for betterment of India instead become aware,know your rights,duties and responsibilities towards India and help it grow with glow…And to our PM please open your mouth without anyone’s support…

The President of India ‘Shri Pranab Mukherjee’ has signed the ordinance of Food Security Bill.It means that now the Bill will be presented in both the house of Parliament in its Monsoon Session before it is passed.

The Food Security programme will be the biggest in the world with the government spending estimated at Rs 125,000 crore annually on supply of about 62 million tonnes of rice,wheat and coarse cereals to 67 per cent of the population.It aims to provide 5 kg of rice,wheat and coarse grains at Rs 3,Rs 2,Rs 1 per kg,respectively,every month to three-fourths of rural population and half the urban population in the country.

So,My fellow Indians what is your take on this..Will it be another Scam by our Government or Will it do any Good to the People of India?Because generally such bill never reaches to beneficiaries in India.

When we Mango People pay our tax we really think that it is our duty to pay tax and it will help in country’s development.But most of our hard-earned money which we pay as Tax I believe is spends in Travel and Enjoyment of our Political Leaders.Every Year these Political Leaders spends crores on their travel and these are Mango People’s money.

Here I am not saying they shouldn’t travel but they make their travel low profile instead.I have found that many political leaders of other countries prefer Public Transport or Low profile travel does minimizing the waste of such huge amount.

A recent report generated by the PMO as part of obligations under the compulsory proactive revelation clause of the Right to Information Act has revealed that PM Foreign Trips in Nine Years of his tenure has spent a whopping of 642 crore rupees and it is indeed a huge amount for a Developing Country.

I tried to illustrate how a Common Man feel on such news through my Cartoon.Hope everyone likes it.. 🙂

But on a serious note such useless Spending,Scams is taking India Nowhere.. 😦

As I was reading Times of India,I came to know that Terrorist has Opened Fire on Indian Soldiers and Reportedly 2 Soldiers were injured and the main reason behind I think is the Srinagar visit of our PM.

As I was going through the news an idea of creating a Cartoon came to mind,if PM hear this news then how would he react to it?

P.S.-No Hard Feeling on Our Honorable Prime Minister,It is just for fun…

P.P.S-Due to great support and encouragement from my fellow bloggers I am able to come up with ideas,Please keep supporting Keep.. 🙂