The other day I was traveling to my when I heard this interesting conversation between the owner and the driver,I guess the owner had some rift with the driver…But the driver was totally nailing the owner with ht is witty excuses

But when the Owner finally decided to fire him…Here is what he said.. 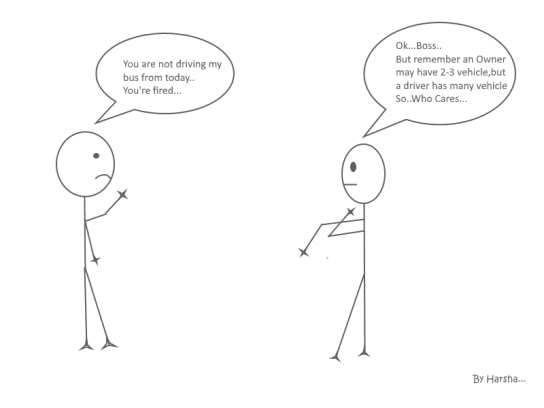 After few thoughts I actually understood what the driver meant to say–He was actually trying to justify his firing like”You fired me today,tomorrow someone else will hire me as there is no dearth of vehicles on the road”

Online is a great buzz word in today’s world,it’s a kind of fad among everyone,from young to old,short to tall..No matter who it is,they are surely under its grip…

Ranging from Online Shopping to Online Dating it kind of offer us most of the luxuries within the stroke of our finger tips…Great isn’t it?

But when a Kindergarten kid makes you an online demand,I guess you would just be astonished and wonder how the world is changing at such a fast pace…

The above cartoon exactly depict the incident and In my head I wonder the deep impact “Online” has put in the mind of that kid…But he certainly has a deep thought and a pretty tough question for his Mom,didn’t he?… 😉

Two months ago my StickMan friend asked me some money to meet certain unexpected turn of events in his life.I obliged and lent him the money but since then I never heard from him,nor he was reachable at home neither on his phone,So I was little worried thinking of what could have happen to him..

Suddenly my phone beeps and I got this text from him “Check out mail dude!”,I quickly logged on to my mail and guess what,I received this mail from him with an image attached to it… 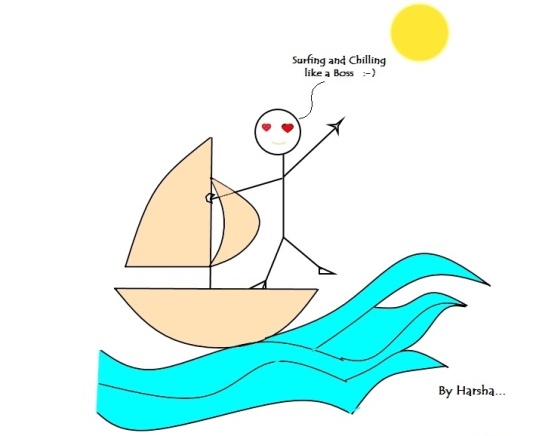 “Dude I was in Goa,Surfing and Chilling like a Boss… 🙂 and BTW wanted to thank you for making this happen.. 😛 ”

What do you think about a Banker?Let me tell you during my earlier days when I went to Bank,I saw them and always think that they are the happy lot out of all the employed person…But are they really?

Ask a Banker….But for the time being I guess the following Cartoon will suffice I guess.. 😛

Confused with the Title of the Post…Worry Not,the following Toon Strip will make you understand what I am trying to say… 😉

Well,Any Guesses What the Post will be about after reading the title?

Well If not let me Start–For the last 3-4 days I have thinking about something unusual,I don’t know how it came to my mind..But I am still thinking.I did lot of research but was never able to find the answer,even Google this time fail to provide me an answer that I am satisfied with…

So Thinking What I am Thinking?Well–Let me put it this way “Does Anyone Know from Where the Word ‘Maa‘ originated?”
Now Maa translate Mother or Mama,but has ever anyone thought where these word came from,I really have no idea..

For me “Mother or Maa or Mama” is the most powerful word,the First word a baby generally speak,but there is no theories whatsoever on the origination of the Word…

So I take it this way..”Long back when Human was in the process of evolution,A Woman was holding her baby and the baby chuckled “mammaama”,”maa” and the likes,since these were the first word that came out of the baby mouth made the woman very happy,Now as in early times Humans didn’t use their brains that much and maybe the didn’t have any particular name to address each other,So I guess the Woman thought of taking the chuckling of her Baby as a way to address her…May be she took that as her name,and said to others that her baby has given her that name…Now as the Evolution Process took pace more and more words evolved as Humans started using their brains and that way other words got added..But the word “Maa” came to address a Mother,Now the word Mother is also the formation of the Process of Evolution.. 😀”

Another Possible Origination–As we all know–“The goat makes a bleat sound, which sounds like a ‘Maa-Maa‘.So I think in early days,May be a Goat came near to a Woman and started calling “Maa-Maa” and the Woman was so touched by the voice of the Goat that she thought of taming her.Now once she started taming her,The bonding between them became very strong and the Goat was like a child to her calling her “Maa-Maa“.So the bonding between a Child and Mother was well reflected,The word “Maa” is what we used to address our Mother”

And How could I end my Post without my new Handsome Stick Figures.. :-P,So here they are.. 🙂

Stick-Man Thinking about the Question in the Present

Stick-Man still Thinking But no answer to the Question

Stick-Man so emerged in thinking,He forgot when he got married.. 😛

P.S.–The Above mentioned things are my imagination as The Origination of the Word “Maa” is bugging me a lot,Please take it in a Humorous Spirit as I don’t mean anything offensive.. 😀
But for me– “MAA” word is the most powerful word in the world..:D,If anyone have knowledge about its Origin,Please Mention in the Comment Section..