Surprised, Well Well let me tell you–The World’s Tallest Statue of the world will be known as “The Statue of Unity” which will be the Statue of Sardar Vallabhbhai Patel and will be built at Sadhu Bet facing the Narmada Dam in Gujarat…

As per the information the construction of this massive Structure will take around 56 months which is four and half years approx,and once completed will be known as I said The Tallest Statue in World.And will cost around Rs. 2500 crores.The monument will be a Public-Private Partnership with most of contribution from Public.
The Foundation Stone for The Statue is to be laid by Gujarat Chief Minister Mr.Narendra Modi on 31st October 2013 and which he says as his dream project.
This statue will be a gratitude towards the Ironman of India “Sardar Vallabhai Patel” and will help to boost tourism not only in Gujarat but also in India.

For More Information on the Statute and its progress..Visit–Statue of Unity.

With the marvel coming up in the future I wonder if this will make it to the 7 wonders of the World.. 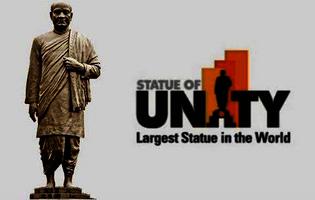 And Here is a Video on “The Statue of Unity”

And Here is English Version Video on  “The Statue of Unity”